Troop 194 is led by both Scouts and adults. The adult leaders in Troop 194 are all volunteers, provide coaching, mentoring, and resources, while ensuring a safe and inclusive environment for scouts to thrive. All adult leaders must pass a background check and complete mandatory BSA Youth Protection training. Youth leaders are elected by Scouts each year.

Mr. Ricci believes in the value of scouting, and became a leader to give back to a program that has taught him so much. He is an Eagle Scout. Mr. Ricci was Den Leader and Cubmaster in Pack 194 Bedford from 2010 to 2017. Mr. Ricci has also been active in the elementary schools PTO, Youth & Family Services Committee, Bedford Babe Ruth Baseball, and Girl Scouts. He is a professional firefighter and emergency medical technician. 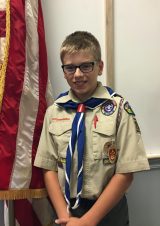 Quinn was elected SPL in June 2019. Quinn joined Troop 194 in 2015, after earning his Arrow of Light in Cub Scout Pack 194. He is currently a Life Scout, and has previously served as Patrol Leader, Scribe, and Quartermaster. Quinn is also on the tennis and rifle teams at Bedford High School. ”Winning the Commander’s Trophy at the American Legion Camporee was a highlight of last year,” he says, “and I hope we do it again this year.”

Mr. Coady began his scouting experience in the fall of 1972 as a member of Pack 194 Bedford, and became Troop 194’s 25th Eagle Scout in 1982. He served as Assistant Scoutmaster for 15 years, and has been Committee Chair since 1988. He has held active positions at the District and Council level, and also serves as treasurer of Cub Scout Pack 194. As an adult, Allan has been repeatedly repeatedly for his service to Scouting, receiving most prominently the Silver Beaver Award, the Flintlock District Award of Merit, and the Flintlock District Norman A. Norton Good Scout Award.

Mr. Mitchell has been an active Scout leader for nearly seven years, first serving in Cub Scout Pack 194 as Assistant Den Leader and Assistant Cubmaster. He is a native of Long Island, New York, where he began his Scouting adventure in Pack 63, Hampton Bays, ultimately attaining the rank of Life Scout in Troop 145, Riverhead. In addition to Bedford’s Scouting programs, he is also treasurer and a coach for Bedford Babe Ruth Baseball-Softball, and is an active member of St. Paul’s Episcopal Church, where he helps lead young people on service trips to alleviate poverty through Appalachia Service Project. Mr. Mitchell is the president of Applied Marketing Science, a consulting firm in Waltham, Mass.

Meet Ryan D, Eagle Scout and Junior Assistant Scoutmaster for Troop 194. He earned his Arrow of Light in Pack 199 on McGuire Air Force Base. Ryan advanced to Star Scout and was elected to the Order of the Arrow while a part of Troop 18, also on McGuire AFB. He earned Eagle while the Senior Patrol Leader in Troop 1128 of Vienna, Virginia. He is a junior at Bedford High School, where he is a Cadet Second Lieutenant in the school’s JROTC program and also frequently writes for the Bedford Citizen. 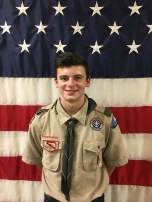 Jimmy M. has been in Boy Scouting since first grade, starting with Pack 194 of Bedford. He achieved his Arrow of Light, and found new interests and grew his passion for scouting and the outdoors. Crossing over, he joined Troop 194 and has been here ever since. Jimmy served as SPL from June 2018 to June 2019, and now serves in the role of Troop Guide, mentoring younger Scouts.

Mr. O’Connor, known as “Mr. OC” around Troop 194, became an Eagle Scout at age 15 in Troop 2, Weymouth, MA. He has been active in Troop 194 for many years as scoutmaster, assistant scoutmaster, crew adviser, merit badge instructor, and Eagle board of review member. Mr. OC is currently the Commander of American Legion Anthony-Hunt-Hamilton Post 221, in Bedford, Troop 194’s chartered organization.

Mr. Scheyder was a Cub Scout and Boy Scout in Brockton, MA, before moving to Bedford and becoming Troop 194’s sixth Eagle Scout. He has been active in the troop ever since, serving as assistant scoutmaster, scoutmaster, and committee chairman.